COSTI’S ACTIVITY AS PRODUCER
Costi began the year 2013 with a work-trip to Thailand, as he was invited to appear in Shahzoda’s video, a very known Uzbek singer, for whom he produced a brand new song. The video will be released soon.
At the end of January 2013, Costi was also invited to appear in Maria’s video, a top singer from Bulgaria, for whom he also produced a brand new song, a future hit in the Balkans.
The latest of Costi’s international collaboration is the one with the famous Latin singer Kat deLuna, with whom he recorded the song “Always on my mind” in Los Angeles. The video was made in Romania and was already released with huge success worldwide.
In May 2012, all the attention of the Romanian media was focused on Costi Ionita, as the song that he produced for the Romanian band Mandinga, represented Romania at Eurovision Song Contest from Baku (Azerbaijan) between 22-26th of May 2012. The song
called “Zaleilah” had a huge impact on the Romanian audience, as well as international. The song was requested for licensing in 2 different countries each day, since the winning day, when at the end of the contest, Romania was placed on the 12th place.

Also, Costi announced at the end of April 2012, the beginning of the collaboration with the famous artist Mohombi, with whom Costi recorded a featuring with Celia, one of the most famous Romanian singers. The song is called “Love 2 Party” and it was released worldwide. The song promotes the Romanian seaside as a touristic attraction for the foreign people.
At the beginning of January 2012, Costi was present at “Tonight Show with Jay Leno”, the most popular TV show in the USA. There, Shaggy performed live alongside Kat DeLuna the song “Dame”, composed by the Romanian Costi Ionita. The live performance made in a few hours the tour of the world and it was Shaggy’s hit.
In November 2011, Costi Ionita produced a new hit for the bulgarian singer Cvetelina Yaneva featuring the arab singer Rida Al Abdullh, entering this way the arabic music industry for the second time. The song was called “Broi me” and it was a big hit in Bulgaria.
But Costi’s success didn’t stop. He also produced “Is it love”, a featuring between Celia and Kaye Styles (the producer of the soundtrack for the TV series Prison Break). The video of the song was considered at that time the most expensive video from the Eastern Europe.
Read More
Available for airplay now
00:00
Login with your radio station account to download tracks from this artist.
Or sign up for free.

Always on my mind 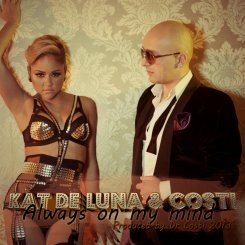