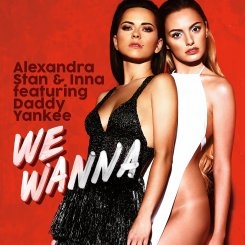 This summer's surprise collaboration and hot hit comes from two Number One dance artists who have been working together int he past months to deliver the biggest dance record of the summer.

Undoubtedly Alexandra Stan and Inna are two of the Romanian artists who lately melt the heart of fans wherever they perform, from Japan to Latin America and beyond. With a fully booked agenda and their hits topping the charts for many consecutive weeks all over the world, the two international stars are in the spotlight again, but this time together with Daddy Yankee, the Puerto Rican star who overgrew the world by his “Gasolina” song. Moreover, he's been working lately with superstars like Enrique Iglesias, Snoop Dogg, Nicole Scherzinger, Fergie, Akon and many others.

The producers of the single “We Wanna” are famous as well:

Axident is a real trendsetter regarding creative music. His portfolio includes singles such as “Wiggle” – Jason Derulo, “Burnin’ Up” – Jessie J, and “Fireball” – Pitbull.

Jacob Luttrell became famous after he composed “Tonight (I’m Lovin’ You)” by Enrique Iglesias. Accordingly, top artists such as David Guetta and Timbaland wanted songs written by him.

Thomas Troelsen, the British producer who collaborated with top names such as Pitbull, Flo Rida, Robin Thicke or Chris Brown, made his mark on “We Are One (Ole Ola)”- by Pitbull and Jennifer Lopez, the official anthem of Football Worldwide Championship in Brazil.

Regarding this collaboration, Alexandra Stan confesses: “I like and admire Inna, she is full of energy, super fun and I think that together we are like a delicious vanilla chocolate milkshake”

On the other hand, Inna declares: “I’m happy to collaborate with Alexandra for “We Wanna” project, I really believe that together we’ll succeed in guiding this song to top charts. Until then, I’m listening it continuously and I can’t wait for you to hear it! So, Alexandra, GO girl!”
Read More
Available for airplay now
Login with your radio station account to listen and to download tracks from this artist.
Or sign up for free.
×